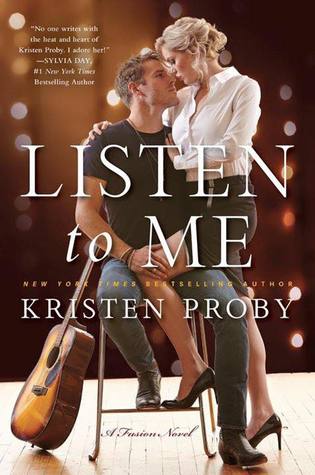 Seduction is quickly becoming the hottest new restaurant in Portland, and Addison Wade is proud to claim 1/5 of the credit. She’s determined to make it a success and can’t think of a better way to bring in new customers than live music. But when former rock star Jake Keller swaggers through the doors to apply for the weekend gig, she knows she’s in trouble. Addie instantly recognizes him—his posters were plastered all over her bedroom walls in high school—he’s all bad boy…exactly her type and exactly what she doesn’t need.

Jake Keller walked away from the limelight five years ago and yearns to return to what’s always driven him: the music. If he gets to work for a smart-mouthed, funny-as-hell bombshell, all the better. But talking Addie into giving him the job is far easier than persuading her that he wants more than a romp in her bed. Just when she begins to drop her walls, Jake’s past finally catches up with him.

Will Addie be torn apart once again or will Jake be able to convince her to drown out her doubts and listen to her heart?

This was an okay book. Nothing I will rave about to my friends or call one of my favorites, but it was an okay read. I loved the story around having 5 friends who co-own a restaurant. Talk about girl power! The main character in this book is Addie. She’s not afraid to stick up for herself and say what she wants, she is a little bit too stubborn though. She was very hard to deal with sometimes, especially always backtracking and comparing everything to past relationships. She had had some really bad abandonment issues and it was kind of annoying. I liked Jake for the most part, He was just too brooding on his past. He was always blaming himself for something that he had no control over. I feel like they were okay together but not my favorite couple. Either she was pulling away or he was. I also enjoyed his relationship with Christina. It was refreshing to see a platonic relationship between a man and a woman in a book. She was always there to call him out on his shit. Overall I enjoyed this story, however, it just lacked depth and a plot.

Is there a manga series that you're loving right now? For me that's Sweat and Soap! This couple is so cute!!
What's a book you haven't gotten to yet, but have high hopes for?
What’s one of the best books you’ve read in 2021? It happened One Summer by Tessa Bailey is definitely in my top 3.
What’s a book that you bought because of book hype? For me it was Neon Gods by Katee Robert.
Happy book birthday to @dopequeenpheebs new book Please Don’t Sit on my Bed in Your Outside Clothes.
What are y’all currently reading? I’m about 75% through Once Upon A Broken Heart by Stephanie Garber.
%d bloggers like this:
%d bloggers like this: