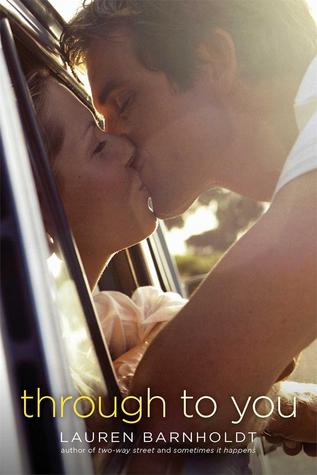 Opposites attract—and then complicate—in this romantic, relatable novel from the author of Two-Way Street and Sometimes It Happens.

It starts with a scribbled note in class: I like your sparkle. Harper had casually threaded a piece of blue and silver tinsel through her ponytail in honor of school spirit day. And that carefree, corny gesture is what grabs Penn Mattingly’s eye. Penn—resident heartbreaker of the senior class. Reliably unreliable. Trouble with a capital “T.” And okay, smolderingly sexy.

Harper’s surprised by Penn’s attention—and so is Penn. The last thing he needs is a girlfriend. Or even a friend-with-benefits. The note is not supposed to lead to anything.

Oh, but it does. They hang out. They have fun. They talk. They make out. And after a while, it seems like they just click. But Penn and Harper have very different ideas about what relationships look like, in no small part because of their very different family backgrounds. Of course they could talk about these differences—if Penn knew how to talk about feelings.

Harper and Penn understand their attraction is illogical, yet something keeps pulling them together. It’s like a crazy roller coaster—exhilarating, terrifying, and amazing all at once. And neither knows how to stop the ride…

This was not for me! It was actually quite boring. Typical good girl falls for the bad guy. While I don’t mind the same plot as other stories, there was nothing to make it stand out at all. I really didn’t like either character. Harper was annoying as hell. She wasn’t experienced with guys and that’s fine, but the girl shouldn’t have put up with his hot and cold attitude. Pen made me want to smack him through the pages. Dude needed to grow up. He wouldn’t communicate anything with anyone. Not with Harper or Jackson or even call his family out their shit. Everything in this book was watered down, I wouldn’t even call this romance. Everything in the end was left out of the story to pursue the so called romance between the two characters. I felt as is nothing was resolved in the end and this book a waste of time.

What’s a book that you bought because of book hype? For me it was Neon Gods by Katee Robert.
Happy book birthday to @dopequeenpheebs new book Please Don’t Sit on my Bed in Your Outside Clothes.
What are y’all currently reading? I’m about 75% through Once Upon A Broken Heart by Stephanie Garber.
Is there a book on your shelf that you’re intimidated by? For me, it’s From Blood and Ash by Jennifer L. Armentrout. This book is hella thick and there is so much hype around this series.
Hello friends! I’m finally back from a small hiatus. How is everyone? What are y’all reading? My current read is this adorable manga!
What’s a new to you author you’re excited to read this year? In 2021 I want to read a lot books from romance authors that I haven’t read before. I’m excited about @penny_wylder because her synopsis always sounds fun!
%d bloggers like this:
%d bloggers like this: