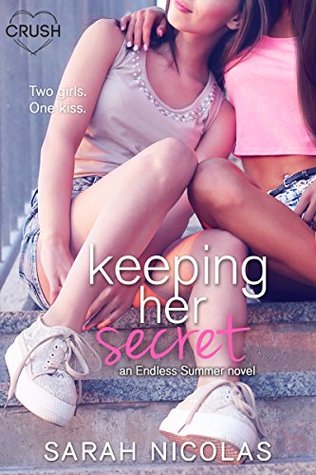 Keeping Her Secret
by Sarah Nicolas
My Rating: 💖💖💖

Disclaimer: This Entangled Teen Crush book contains drinking, sexual situations, and a fairy-tale romance sure to make your heart melt.

The last person Riya Johnson expected to run into at her new summer camp is Courtney Chastain—her childhood best friend and the girl who broke her heart after a secret, mind-blowing, life-altering kiss. She definitely didn’t expect to be sharing a bunk bed with her for four long weeks.

Courtney has what every girl wants—she’s beautiful, rich, and the object of every boy’s desire at Camp Pine Ridge. Too bad none of them make her feel an iota of what Riya’s kiss did all those years ago. But Courtney needs to uphold appearances at all costs—even if it means instigating an all-out prank war with Riya as her main target.

Neither girl can stop thinking about the other…but that doesn’t mean they can give up past hurts and take a chance on a future together.

Copy provided by Entangled Publishing in exchange for an honest review.

I don’t read a lot of F/F books but the synopsis really pulled me in. It was cute and an easy read. Riya is starting a summer camp and soon after she gets there she sees her childhood best friend Courtney. Courtney broke her heart four years ago by not talking to her anymore after a mind-blowing kiss.

I immediately loved Riya! She was so adorable and very open about who she was. She was an open bi character who never hid herself. She was easy to love. Now, I had to warm up to Courtney. I couldn’t figure out what her problem was at first. Once we got a bit more of perspective, it comes out that she’s scared something is wrong with her because of her feelings for Riya.

This book tackled the pressure of being what people want you to be. I can understand Courtney’s hesitation, but it did get kind of annoying. I hated that her first thought was to either ignore Riya or make snide remarks to her. Every time it seemed like somebody would find out about them she would push to Riya to the side. Now Riya wasn’t perfect either, she did push Courtney to come out before she was ready. It was a lot of back and forth and have a bit of useless drama. But this was about teenage girls so what can you expect?

Now I did enjoy the romance between them. It was so sugary sweet!! You could tell that they really liked each other and you wanted nothing more than an HEA for these girls.

Also, the best character of this book was Courtney’s brother Colt! He was always there to listen to their problems. Not only listen but he did a lot of background work to help them out as well. He was so supportive of both girls and was an absolute angel!

The last bit of the book had to be my favorite. I was smiling like an idiot and I wanted more. Overall, While it wasn’t a favorite of mine, this was a very cute story and I really enjoyed it!

4 thoughts on “Keeping Her Secret by Sarah Nicolas”