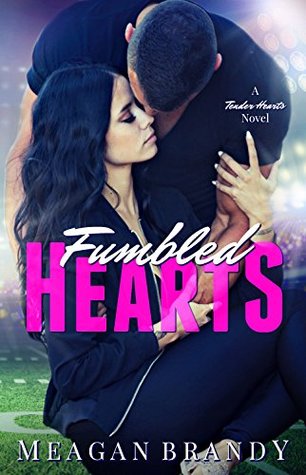 After months of refusing, I finally agreed to make the move to Alrick Falls. My family thought it was best – that a new scene would be good for me – and I was sick of having the same conversation.
So here I am, and the plan is simple. Smile through each day and avoid her at all cost.
It’s perfect.
Until the cocky quarterback comes into play.
The last thing I want is his crooked grin and dark brown eyes focused on me.
Yet here he is, constantly in my space, pushing me, daring me to care. Telling me what I think and feel, as if he knows.
He doesn’t know anything. And I plan to keep it that way. He’s the persistent playboy who refuses to walk away. I’m the impassive new girl with nothing left to give.
Things are about to get complicated.

Where to begin? I had been seeing this book around for a while and decided to finally read it. I was expecting a sweet YA romance. That is not what I got. What we got was a long book with a main character who irked me to no end. This was a mix between the Fallen Crest series & The Royals series to me. I could see what the author was trying to do here, but it fell short.

Kalani was a tough character for me to like. I think she was supposed to come off as witty and a badass who doesn’t care what people think about her. I thought that she uncaring, judgmental, and annoying. She started the book off knowing she was judgmental as hell and continued throughout this book. I know she went through a lot in the past, both her parents and grandpa died on her birthday. Anytime things became real she would shut down or joke her way out of it. Especially when it came to Nate. I really hate the way she treated Nate at times.

Nate really deserved better than he got in the relationship. Was he playboy before he met her? Yeah. Did he want to be with her and let her know that he only wanted her? Yeah. She would kick him out of her house and still go on dates with other guys even when he laid his feelings out on the table. Seriously? Girl get a grip.

A lot of this book was unrealistic in so many ways. Parents who approve and actually tell their son to have sex in their house (while they are there? A high school girl who just happens to be emancipated and lives in a 3 bedroom house by herself? These were supposed to be high school seniors, however, they are doing crap that I didn’t do until my twenties. This should have really been set in college.

Overall, this book was unrealistic, too long, and such a disappointment. I saw that the next book in this series is about Parker. And while he was a complete angel, I don’t have it in me to read anymore.

Is there a manga series that you're loving right now? For me that's Sweat and Soap! This couple is so cute!!
What's a book you haven't gotten to yet, but have high hopes for?
What’s one of the best books you’ve read in 2021? It happened One Summer by Tessa Bailey is definitely in my top 3.
What’s a book that you bought because of book hype? For me it was Neon Gods by Katee Robert.
Happy book birthday to @dopequeenpheebs new book Please Don’t Sit on my Bed in Your Outside Clothes.
What are y’all currently reading? I’m about 75% through Once Upon A Broken Heart by Stephanie Garber.
Loading Comments...
%d bloggers like this:
%d bloggers like this: