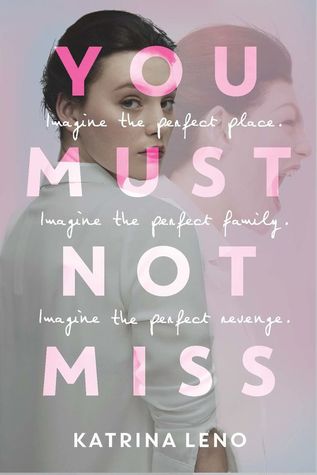 You Must Not Miss
by Katrina Leno
My Rating: ⭐⭐⭐
Check it Out: Goodreads | Amazon | B&N

Now, Magpie is called a slut whenever she walks down the hallways of her high school, her former best friend won’t speak to her, and she spends her lunch period with a group of misfits who’ve all been socially exiled like she has. And so, feeling trapped and forgotten, Magpie retreats to her notebook, dreaming up a place called Near.

Near is perfect–somewhere where her father never cheated, her mother never drank, and Magpie’s own life never derailed so suddenly. She imagines Near so completely, so fully, that she writes it into existence, right in her own backyard. It’s a place where she can have anything she wants…even revenge.

“Your despair made Near. You felt so deeply, and for so long, that your very sadness grew limbs and walked away from you.”

What did I just read? Is this considered Magical Realism? The overall aspect of Near still confuses me. Despite confused, what I can’t deny is that Leno has a way with words. She has a way of weaving words together that hit you hard and make you think.

What I think was a downfall for me was the majority of the characters. Magpie, Allison, and her parents. Even her sister. I didn’t like them, but maybe that was the point. Life isn’t pretty and neither were the actions of these characters.

This book talks about some difficult topics. So be sure that you are in a good headspace for it. I was surprised by the length went to in this book concerning these topics. It made the book come off real and will resonate with so many teens who are going through some of the same issues.

While I don’t think this book will be for everyone, I highly recommend that people give it a try. It mixes reality and hard issues.

I received an ARC via The NOVL for an honest review. The Quote was taken from an ARC and is subject to change upon publication.

11 thoughts on “You Must Not Miss by Katrina Leno”