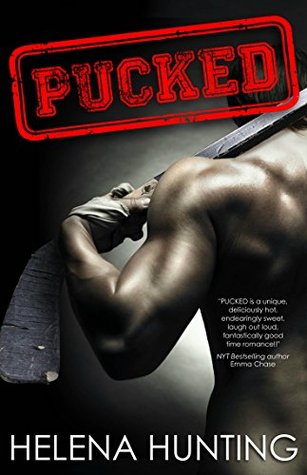 With a famous NHL player for a stepbrother, Violet Hall is well acquainted with the playboy reputation of many a hockey star. So of course she isn’t interested in legendary team captain Alex Waters or his pretty, beat-up face and rock-hard six-pack abs. But when Alex inadvertently obliterates Violet’s misapprehension regarding the inferior intellect of hockey players, he becomes much more than just a hot body with the face to match. Suffering from a complete lapse in judgment, Violet discovers just how good Alex is with the hockey stick in his pants.

Violet believes her night of orgasmic magic with Alex is just that: one night. But Alex starts to call. And text. And email and send extravagant – and quirky – gifts. Suddenly he’s too difficult to ignore and nearly impossible not to like. The problem is, the media portrays Alex as a total player, and Violet doesn’t want to be part of the game.

I was expecting to like this one so much more than I did! I have been hearing nothing but great things about Puckedsince I started reviewing books but for some reason, I just never read it. This book dragged for me!! Seriously, I felt like I achieved something for making it all the way through.

Let me start off by saying that Violet never grew on me. She was rash and immature. For a while, I was wondering if she was interested in Alex as a person or just for sex. This girl went on and on about his manhood without really anything about Alex. She was quick to jump to conclusions. COMMUNICATION! I feel like she needed a lesson in that. So much of the drama could have been taken care of if she had just talked to him.

Alex was a big teddy bear and I could understand the appeal of him. That’s not to say he didn’t make mistakes because he did! I really wish he could have pulled his head out of his butt earlier than he did though. I really did enjoy the way he pursued Violet. He pursued her the way every woman should be. The thing that I liked about Alex the most was the way that he always asked for consent anytime he and Violet were together.

As far as plot wise, it’s just nothing special. Sex, conflict, sex, conflict, and etc. I feel like I’m not even exaggerating either! We know I’m ALL for sexy scenes, but after a while, it gets a bit repetitive to read about. I kept waiting for something else to happen between them besides that, but we only got glimpses of them actually doing things outside of the bedroom together.
Also, I was so tired of reading about the beaver references and the nicknames for his manhood. Goodness gracious!

All in all, this book was a bit of a letdown for me. However, I’m still going to give the rest of the series a try. Maybe it’s one of those situations where the first book wasn’t okay but the other books will be great? We will see!