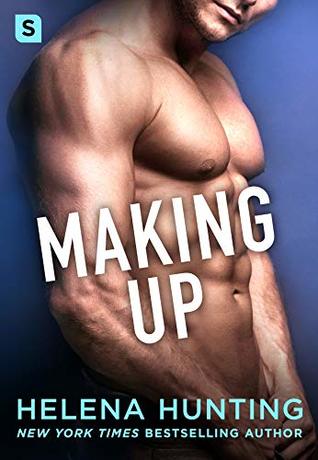 Making Up
Series: Shacking Up
By: Helena Hunting
Check it Out: Goodreads

Cosy Felton is great at her job—she knows just how to handle the awkwardness that comes with working at an adult toy store. So when the hottest guy she’s ever seen walks into the shop looking completely overwhelmed, she’s more than happy to turn on the charm and help him purchase all of the items on his list.

Griffin Mills is using his business trip in Las Vegas as a chance to escape the broken pieces of his life in New York City. The last thing he wants is to be put in charge of buying gag gifts for his friend’s bachelor party. Despite being totally out of his element, and mortified by the whole experience, Griffin is pleasantly surprised when he finds himself attracted to the sales girl that helped him.

As skeptical as Cosy may be of Griffin’s motivations, there’s something about him that intrigues her. But sometimes what happens in Vegas doesn’t always stay in Vegas and when real life gets in the way, all bets are off.

I’ve struggled with this series after book one and Making Up was no different. While this story had some steamy moments, it had too much drama and was highly forgettable.

The only Helena Hunting book that I haven’t struggled with was Shacking Up. I can’t honestly say why I keep giving this series more chances, but I always do. Maybe because the synopsis really intrigued me. However, it didn’t win me over. Basically, it comes down to Cosy being flighty and the relationship between her and Griffin.

I really had a hard time believing that there could be a relationship between these two. Let’s be honest here, they don’t have anything in common besides working/wanting to work in hotels. They weren’t on the same level and I honestly don’t think that it was more than sex and attraction. Cosy was flighty and immature at times. I seriously don’t know what Griffin saw in her.

Also, this book was filled with drama. Every time I thought we were passed one thing, something else happened. It was exhausting and kind of furthered my point that they didn’t belong together.

While this wasn’t for me, the sex was hot and if you’re a fan on Hunting’s previous books then you might enjoy this.

17 thoughts on “Making Up by Helena Hunting | ARC Review”