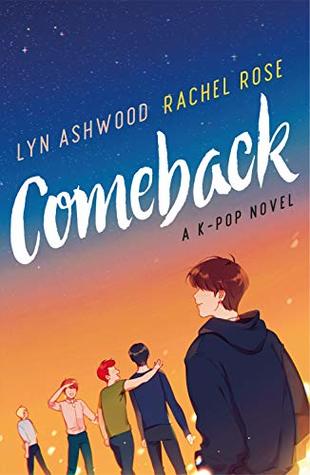 Comeback
Series: Unsure if it will become one
By: Lyn Ashwood & Rachel Rose
Check it Out: Goodreads

Emery Jung is living his dream. Known by his stage name M, he is loved by millions of fans around the world as a member of the rising K-pop group NEON, but all fame comes with a cost, especially when one slip up can have viral consequences.

Alana Kim is trying to forget. After a tragic loss sends her spiraling, she escapes to her family in Korea, abandoning her love of music along the way. However, her plans are derailed when she literally runs into M, the famous K-pop idol.

When their paths collide, Emery and Alana must work together to prevent a scandal from ruining NEON’s success, sparking a journey of friendship, love, and healing. Unfortunately, fame and love aren’t easily compatible, especially in the world of K-pop.

As soon as I heard that there was a contemporary K-pop novel out there I knew I had to read it. If you don’t know, K-pop fuels my heart. This was a good debut and it gave us a deeper look into what really goes into a comeback.

If your not familiar with K-pop, a comeback is when an artist or group is back again with a new album/single and is promoting via performances and etc. This book follows the comeback of NEON. I easily loved every member of this group! They all seemed so real and had their own distinct personalities. They way they supported each other seriously added years to my life. Is there anything better than a group of guys who love each other and aren’t afraid to show it? I seriously need some merch so I can support this fictional group.

This book showed the parts of a comeback that we as fans don’t get to see. The stress, the opinions of how they are less than male because they are an idol, and the hustle of how everything works. Our two main characters met once briefly but that time really made an impact on both of them.

Emery was sweet and such a great character. He was hiding so much his pain from his bandmates. His relationship with his parents is strained because of his choice to become an idol. That disappointment eats at him every day. Reading about that slowing eating away at him was heartbreaking.

When we meet Alana it’s during the aftermath of some very tragic things that have happened to her. Meeting Emery scares her because she isn’t the person that she was before. Reading about her opening herself up to the world was pretty great. It’s never easy to overcome trauma and I think the authors did a great job at showing that.

The relationship between these two was very cute. They both had issues that they helped each other work through. They understood each other’s pain and really became friends and then lovers. I do have to say that while there is a romance here, it didn’t seem like the main focus. I personally would have loved to have a few more scenes between them.

There were some things that I wish were handled better or talked about more. Emery’s anger issues were brought up a few times and I would have loved to see him get help regarding it. Also, this ends kind of abruptly to me. There are still questions that I have about Alana and Emery. I’m unsure if this a standalone or if there will be more books about this group and relationship.

Even though I did have some issues with a few things, this was a good debut! I’m excited to see what these two authors publish next. If you a K-pop fan or not then I recommend if you are a fan of romance, supportive relationships, and a good story.