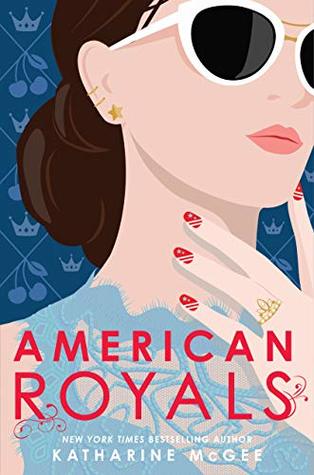 What if America had a royal family? If you can’t get enough of Harry and Meghan or Kate and William, meet American princesses Beatrice and Samantha.

When America won the Revolutionary War, its people offered General George Washington a crown. Two and a half centuries later, the House of Washington still sits on the throne. Like most royal families, the Washingtons have an heir and a spare. A future monarch and a backup battery. Each child knows exactly what is expected of them. But these aren’t just any royals. They’re American.

As Princess Beatrice gets closer to becoming America’s first queen regnant, the duty she has embraced her entire life suddenly feels stifling. Nobody cares about the spare except when she’s breaking the rules, so Princess Samantha doesn’t care much about anything, either . . . except the one boy who is distinctly off-limits to her. And then there’s Samantha’s twin, Prince Jefferson. If he’d been born a generation earlier, he would have stood first in line for the throne, but the new laws of succession make him third. Most of America adores their devastatingly handsome prince . . . but two very different girls are vying to capture his heart.

The duty. The intrigue. The Crown. New York Times bestselling author Katharine McGee imagines an alternate version of the modern world, one where the glittering age of monarchies has not yet faded–and where love is still powerful enough to change the course of history.

Man oh man. I don’t even know what to say about American Royals. I was expecting so much from this book and I was let down H A R D. The premise of an alternate America sounded so good. However, this is basically her previous series in a new setting.

Beatrice – Next in line to be Queen of America
Samatha – Sister to Beatrice, the spare
Jefferson- Twin to Samantha, ex of Daphne, has feelings for Nina
Nina – Best friend of Samantha, commoner, in love with Jefferson
Daphne – Ex of Jefferson, America’s Sweetheart, will do anything to get Jefferson back

These characters came off very one dimensional. You never really got a chance to care for them or see them for anything other than their shallow personalities. Besides the characters being a letdown, the plot was quite boring. Everything that happened here was predictable and not very memorable. I think this book being over 400 pages is too much.

What I realized is that maybe I’m not the audience intended for this one. I don’t like tons of drama in my books. Especially unnecessary drama. This is equivalent to if Gossip Girl was about a royal family.

All in all, this was a miss for me and I really don’t see myself picking up the second book. If you are a fan of drama and enjoyed McGee’s last series, then you might enjoy this one.