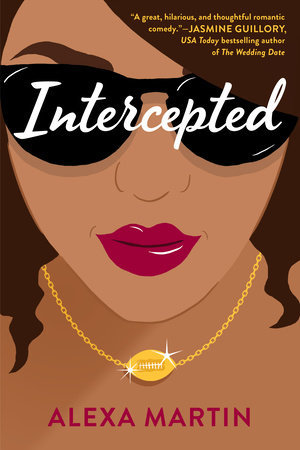 Intercepted
Series: Playbook
by: Alexa Martin
Check it Out: Goodreads

Marlee thought she scored the man of her dreams only to be scorched by a bad breakup. But there’s a new player on the horizon, and he’s in a league of his own…

Marlee Harper is the perfect girlfriend. She’s definitely had enough practice by dating her NFL-star boyfriend for the last ten years. But when she discovers he has been tackling other women on the sly, she vows to never date an athlete again. There’s just one problem: Gavin Pope, the new hotshot quarterback and a fling from the past, has Marlee in his sights.

Gavin fights to show Marlee he’s nothing like her ex. Unfortunately, not everyone is ready to let her escape her past. The team’s wives, who never led the welcome wagon, are not happy with Marlee’s return. They have only one thing on their minds: taking her down. But when the gossip makes Marlee public enemy number one, she worries about more than just her reputation.

Between their own fumbles and the wicked wives, it will take a Hail Mary for Marlee and Gavin’s relationship to survive the season.

I have been putting off reading this book for so many reasons. Me and hyped romances are not friends, I’ve heard it has too many hashtags, and the number one reason is that I hate those sports wives reality shows. Imagine my surprise when not only I liked it, but when I couldn’t stop reading it. I blew through this book so quickly I should have whiplash. I adored these characters so damn much and I refuse to believe that this was a debut.

Marlee stole my heart early on with her sarcasm and her not taking crap from the wives and the people in the stands at the games. Seriously, I love her. I don’t think I related to a fictional character more.

“After I paid the bills, I realized I couldn’t afford any more wine. Then I made a spreadsheet to determine which bills I could cut in order to provide the necessary amount of wine and in the end, wondered if shelter is really necessary.”

#relatable Sorry, I had to throw a hashtag in this review! Honestly, the hashtag didn’t bother me at all. I really laughed while reading them. But back to Marlee, this woman was so strong. If I had those wives saying all those things about me, there is no way I could have kept my composure and always have a comeback like her.

The relationship between her and Gavin was so freakin’ cute, you guys. I honestly couldn’t get enough of them. I will always love a man who doesn’t beat around the bush and be upfront with his feelings. Saying I loved Gavin is an understatement. He made me swoon so damn hard that it’s unreal.

“I’m with you every chance I get, and if I’m not next to you, I’m on the phone. I’m smitten, Marlee. Those articles may have been right in calling you a seductress.”

Reading about Marlee and Gavin falling in love was a perfect Friday afternoon. From their hot AF chemistry down to them actually playing Jeporadty together, ya girl was a smiling mess!

I was so ready to give this 5 stars, but I couldn’t. There was just so much drama! I get it, I’ve seen enough reality TV athlete wives to know that there was going to be drama. I was just over it because I’m the type of person who doesn’t like THAT much drama in my books. If you are a frequent watcher of those shows or just like a lot of drama, then you will love this.

All in all, I’m kicking myself for not picking up Intercepted so much earlier. I fell in love with the characters and the romance and I can’t wait to pick up the next book in this series.