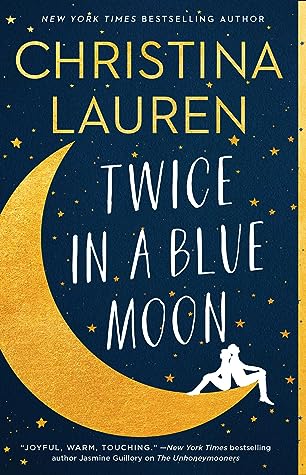 Twice in a Blue Moon
by: Christina Lauren
Expected Publication Date: October 22, 2019
Check it Out: Goodreads

Sam Brandis was Tate Jones’s first: Her first love. Her first everything. Including her first heartbreak.

During a whirlwind two-week vacation abroad, Sam and Tate fell for each other in only the way that first loves do: sharing all of their hopes, dreams, and deepest secrets along the way. Sam was the first, and only, person that Tate—the long-lost daughter of one of the world’s biggest film stars—ever revealed her identity to. So when it became clear her trust was misplaced, her world shattered for good.

Fourteen years later, Tate, now an up-and-coming actress, only thinks about her first love every once in a blue moon. When she steps onto the set of her first big break, he’s the last person she expects to see. Yet here Sam is, the same charming, confident man she knew, but even more alluring than she remembered. Forced to confront the man who betrayed her, Tate must ask herself if it’s possible to do the wrong thing for the right reason… and whether “once in a lifetime” can come around twice.

I went into this already having doubts, so imagine my surprise that I liked it. I haven’t even just liked the last two books Christina Lauren released. As I always say, their books are either hit or miss with me. While I didn’t love it, I can say that I actually didn’t hate it.

I want to say it’s because it was different than what they have recently released. It was more on the emotional side and it didn’t dwell on the sex. It’s about first love, betrayal, and forgiveness. It’s a second chance romance that actually packed a punch.

I think what made this enjoyable for me were the characters. I really did love almost everyone we met. My favorite character here was Tate. She was strong and I really wanted the best for her. She was so easy to love and I really admired her being open to the fact of even thinking about forgiving Sam, I don’t know if I could have.

The side characters were also great. Her friend Charlie was someone that I want to be best friends with and I adored Nick. Speaking of Nick, it leads me to my next part.

This has a small part of this book that speaks on race and I loved how they slide that into this book. It made me feel seen and honestly glad they decided to add that fact for people who are unaware or don’t care. Nick was an actor playing a black man back in the 1950s who wanted to court a white woman. Hearing him speak of why he wanted to do it really spoke to me.

” You asked me why I wanted this role? It’s amazing, okay, but I feel like people forget: shit like that happened and honestly, still does. I want them to remember.”

You’re probably reading this wondering why I gave it three stars. While I really enjoyed the beginning half while we got to see their story and how they fell in love, the second half didn’t have the same pace. It felt slower and I wasn’t as invested as I was in the beginning. You knew a reunion was coming but it seemed like it was drawn out for the angst factor. I also didn’t love where this book ended. An epilogue would have made this book so much better.

To wrap up this review, I actually liked a new release from Christina Lauren and that hasn’t happened since I read Josh and Hazel.

✨I received an ARC via the author for an honest review. The quote was taken from an ARC and is subject to change upon publication.

12 thoughts on “Twice in a Blue Moon by Christina Lauren”