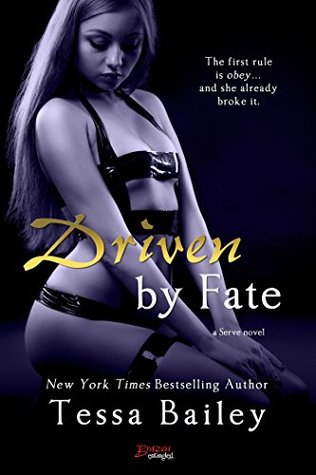 The first rule is obey… and she already broke it.

Francesca “Frankie” De Luca always pays her debts. Even when it means stepping inside Serve, the sensuous Manhattan club that caters to particular adult desires. For Frankie, it’s a taste of something she’s always wanted—and never received. Until a sharply dressed Brit orders her into his room, and instructs her to undress before delivering the carnal punishment she so desperately needs…

She wasn’t the woman Porter Evans was expecting. Not this wild thing with the pale, silvery eyes. And such cheek. But she violates Porter’s strict rules of control. Temptation is a dangerous thing indeed. Yet everything about Frankie cries out for schooling about the tantalizing interplay of pleasure and pain. So Porter offers Frankie a deal she can’t refuse—and the only thing she owes him is submission…

This was a very steamy story between our main characters Frankie and Porter. Porter is a straight laced guy who is setting up for a scene when Frankie gets curious outside his door. What follows next is a steamy moment that both of them don’t want to walk away from.

Ya’ll Porter was the dirty talker of my dreams! I couldn’t wait for every sex scene because I never knew what was going to come out of his mouth. He could talk a nun out of her underwear. Frankie really didn’t know the beast she woke up when she walked into his room. Frankie was easy to like. Even though she was out of her element, she didn’t back down and continued to show up each time. The chemistry between them was there and apparent throughout the book.

What did irk me was the back and forth with Porter. He knew that was abusing Francessa’s trust but kept doing it anyway. It’s 2019, can we officially be over men who hurt and push women away just because they are starting to feel? I’m over that.

All in all, while it wasn’t the best book it was pretty steamy and kept me reading. Which is an accomplishment because I have DNF’ed so many of Tessa Bailey’s books in the past.

9 thoughts on “Driven by Fate (Serve #5) by Tessa Bailey”