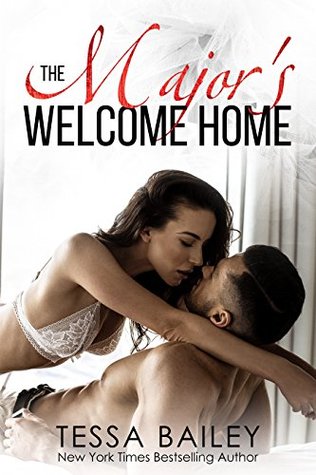 When Kenna Sutton is tasked with driving home newly returned Beck “True Blue” Collier, she expects the strategic Army mastermind to be a pasty number cruncher. Never at a loss for words, Kenna is nonetheless rendered speechless by the gorgeous, hard-bodied and utterly inexperienced Army Major that lands in her passenger seat. Outraged by Beck’s lack of a welcome home after seven long years overseas, Kenna takes matters into her own hands, giving Beck something he’s only ever fantasized about in his bunk.

Beck has never shied away from a test of will and Kenna gives new meaning to the word challenge. One problem? Kenna’s father is the Lieutenant General presenting Beck with a Silver Star and Beck is determined to treat Kenna with the respect she deserves. Kenna has other ideas, however, tempting Beck’s resolve at every turn. But how long can one lonely, starving man hope to resist the woman he craves?

I was pleasantly surprised by this short read! I’m starting to think that I will only like a Tessa Bailey book if it’s absolutely filthy and friends, this sure was! I would have given this 5 stars if it wasn’t for a few issues.

The steam was immediate as soon as these two met and they really could have started a fire with the sparks they kept throwing around. I think they were what they other needed. Kenna, even though she didn’t want to admit it, was a nurturer. After some of the things that Beck saw and done in war that’s exactly what he needed.

I absolutely adored Beck! He was full of surprises and had such a dirty mouth. Some of the things that came out of his mouth had me looking around to make sure nobody knew what I was reading. He was a sweet southern man unless he was in the bedroom with Kenna.

I will say that it did take me a bit to warm up to Kenna. It really felt like the author was going the extra mile to make her not like other girls. The combat boots, welding, and just her overall badass attitude. Once we got to peel back some of her layers and see the reason behind some of her actions, I ended up liking her but I never fully connected with her.

What made this drop down to four stars was the fact that I can’t stand when people belittle someone’s feelings. Beck was a grown man and knew what he felt and what he wanted. Just because Kenna was scared of feeling something for him didn’t make it right for her to hurt him with her words or belittle how he said to feel about her.

I see a lot of people saying that they didn’t like how possessive Beck was or how the author threw some daddy kink in the book later. Well if you read a few of my reviews then you will know that I am very unapologetic about my love for those two things in my romance books. So if you enjoy those too, then you are in a for a treat.

Like I said earlier, this book surprised me. I would have loved to read more about their life together but I can understand that this was just a novella. If you like dirty talking men and hot as hell sex scenes then this might be for you.

10 thoughts on “The Major’s Welcome Home by Tessa Bailey”