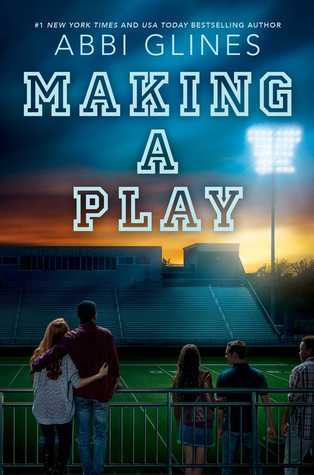 Ryker Lee is finally enjoying his senior year—he has great friends, hangs out with hot girls, and is on track to get a football scholarship that will set him up for college. Despite this, a small part of him wonders if there’s more to life than parties and meaningless hookups—and if football even means as much to him as it does to his fellow teammates. And when he meets the new girl at school, his world totally changes…

Aurora McClay is new to Lawton. She’s grateful that her twin brother, Hunter, is star of the football team and can help her adjust to her new school, but she’s not grateful at how overprotective he is over every person she meets. Just because she is deaf does not mean people have to treat her differently. When she meets Ryker Lee, the two of them spark an instant and intense chemistry, one that proves to be controversial not only because of Ryker’s reputation as a player, but also because of Aurora and Hunter’s father’s bigoted views about who Aurora can and can’t date.

Aurora and Ryker know in their hearts that they are meant for each other. But can their relationship endure the turmoil of rumors and prejudice?

Ratings of other books in series:
»Until Friday Night⭐⭐⭐⭐
»Under the Lights ⭐⭐
»After the Game ⭐⭐⭐
»Losing the Field ⭐

I don’t know why I still keep picking up books in this series. Maybe because I’m waiting for one to capture my heart like the first one did? Who knows. I just know that I’m disappointed again.

While this wasn’t as terrible as Losing the Field, it wasn’t anything remarkable either. This entire book takes place over the span of two weeks I believe. Two damn weeks. My eyes should be stuck in the back of my head from all of the times that I rolled them. Y’all, I was supposed to believe that these two fell in love and had all these feelings in 5 days? No thanks. I can deal with insta love if a book specifies that it will be about that. However, I can’t deal with them falling for each other in two seconds flat.

The only thing about this book that I liked was that she tried to tackle issues about race. Ryker is black and Aurora is white. Her father is a racist and it brought up topics about race and living in a small town.

“She’s a white girl with a father who doesn’t want her with a black man It’s typical around here. Don’t seem to matter that I make more money than he does or that my ancestors were some of the first to settle in this town.”

It was wrong, but it’s still something that needs to be talked about. Which leads me to my other issue. I’m supposed to believe that a full-blown racist could just get over the fact that his daughter was dating a black guy in the process of a week. Sure, Jan.

I feel like I could go on and on about the issues that I had with this book, but I’m going to stop while I’m ahead. I haven’t been able to find anything about if this series is going to continue but, I can’t say that I would be disappointed if it didn’t.