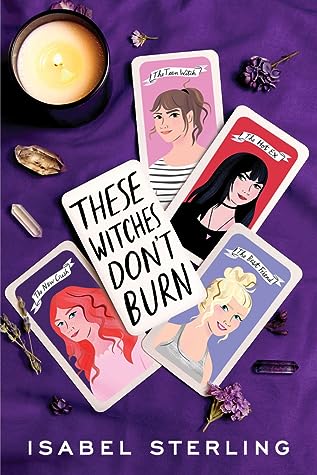 Hannah’s a witch, but not the kind you’re thinking of. She’s the real deal, an Elemental with the power to control fire, earth, water, and air. But even though she lives in Salem, Massachusetts, her magic is a secret she has to keep to herself. If she’s ever caught using it in front of a Reg (read: non-witch), she could lose it. For good. So, Hannah spends most of her time avoiding her ex-girlfriend (and fellow Elemental Witch) Veronica, hanging out with her best friend, and working at the Fly by Night Cauldron selling candles and crystals to tourists, goths, and local Wiccans.

But dealing with her ex is the least of Hannah’s concerns when a terrifying blood ritual interrupts the end-of-school-year bonfire. Evidence of dark magic begins to appear all over Salem, and Hannah’s sure it’s the work of a deadly Blood Witch. The issue is, her coven is less than convinced, forcing Hannah to team up with the last person she wants to see: Veronica.

While the pair attempt to smoke out the Blood Witch at a house party, Hannah meets Morgan, a cute new ballerina in town. But trying to date amid a supernatural crisis is easier said than done, and Hannah will have to test the limits of her power if she’s going to save her coven and get the girl, especially when the attacks on Salem’s witches become deadlier by the day.

I’m so disappointed that I didn’t love this. Did I hype this up too much in my mind? I don’t know. All I know is that I was looking forward to this book since the beginning of the year and once I finally got my hands on it I was very bored.

We have queer witches, suspense, and this story was set in modern day Salem. There was seriously no way that this should have gone wrong. However, most of my issues reside with the characters of this story.

I have to be honest here, there wasn’t one character that I connected with or even really cared about. Everyone was okay but came off one dimensional. Our main character Hannah was a bit exhausting at times. She complained a lot and was just so bland.

Her relationship with Veronica was toxic and I seriously got sick of them arguing. Veronica was selfish, manipulative, and only really cared about herself.

“Because,” I say, my voice so soft it’s nearly swallowed up by the trees, “I’m standing here, telling you how much you hurt me, and you can’t hear it.”

We are introduced to a new girl in town named Morgan who becomes Hannah’s new crush. Being honest again, this relationship was just okay. While Hannah and Morgan could have been great friends I can’t see them being in a relationship. It just wasn’t there.

Another reason I had to lower my rating was because I knew all of the “surprises” before they unfolded. And let me tell you, I am normally the last one to guess twists and turns in a book. Seriously though, everything was so P R E D I C T A B L E.

All in all, I was disappointed as hell and I seriously doubt that I will pick up the next book in this series.

27 thoughts on “These Witches Don’t Burn by Isabel Sterling”