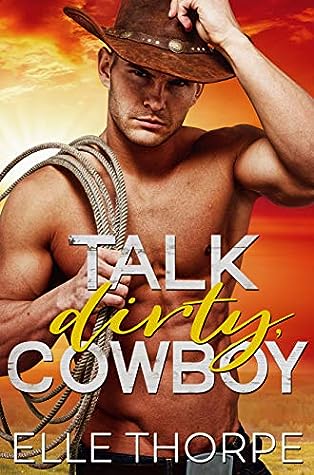 Eight seconds to glory. One second to lose it all.

Bowen Barclay lived to ride bulls – until his single-minded focus cost his wife her life. Four years on, raising his son alone is the only thing he’s getting right. His rodeo career is going down in flames and instead of dating, he’s playing his kid’s video games.

Paisley Ackerly loves to sing. Loudly and offkey, but in the privacy of her rundown home, it’s only her children she’s torturing. Until her ten-year-old leaves his gaming console on, with a handsome cowboy still on the webcam, listening to every word.

Being accused of internet creepery isn’t the best way to meet a woman, but when an instant spark ignites between the two, it isn’t long before online chat spills over into real life dirty talk.

But while Paisley might love Bowen’s filthy mouth, when the pressures of his public career and her secret past explode, words won’t be enough to save them.

This single-parent romance brings the steam against a backdrop of professional bull riding, rodeo, and small-town cowboys.

This was my first book by this author so I wasn’t really sure what to expect. I enjoyed Talk Dirty, Cowboy, but I didn’t love it I thought I would. I’m all for dirty talkers, cowboys, and single parent romances. So what went wrong for me? Mainly two things.

I don’t know how I missed that Bowen had a dead wife in the synopsis, but I did and that’s my fault. I was going to DNF this when I found that out but I’m glad I didn’t and continued to finish this. While I don’t think that he was still in love with his ex-wife, I did feel like he was hung up on her death. He was so determined to avenge her death that he was going to miss out on a relationship with someone else.

Now, I loved Paisley and still like her. However, and I hate to say it, but she seemed a bit irresponsible at times. She let Bowen take up so much of her time that her own life was falling apart. She fell behind in her studies and was even losing her home, but she still made sure to go out and be there for Bowen. I felt as if she should have tried to take care of herself and her situation a bit more.

Relationship wise, I liked them together. The chemistry between Paisley and Bowen was sweet and I loved the way he never hesitated in showing Paisley that he was interested in her. It never felt awkward or like it was moving too fast.

For the most part, I did enjoy this. The banter and the chemistry between the characters were really good. After the ending I know I’m going to read the next book in the series when it released! If you are a fan of cowboy romances and don’t have an issue with dead spouses in books, then I would give this a try.