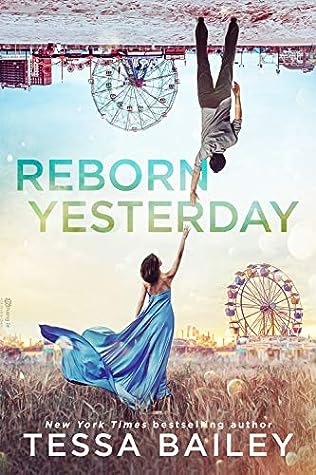 A timeless love story with bite.

It was a night like any other for funeral home director Ginny Lynn, until the exceptionally handsome—and unfortunately deceased—young man on her embalming table sat up, opened his emerald eyes and changed the course of her life forever, making her feel quite fluttery while he was at it.

Humans aren’t supposed to know Jonas Cantrell, or any vampire, exists. It’s kind of a major rule. Despite his instantaneous bond with perfectly peculiar Ginny, he has no choice but to erase her memories of their one and only meeting.

That was the plan. Before a reluctant Jonas can wipe Ginny’s mind clean, she reveals a secret that brings their worlds crashing together. Human and vampire. Past and present. Darkness and light. And while their love is strictly forbidden, it might be the only thing that can save them…

Reborn Yesterday is a standalone paranormal romantic comedy with a happily ever after.

As soon as I saw that Tessa Bailey was releasing a paranormal romance, I knew that I wanted to get my hands on it. I truly enjoyed Jonas and Ginny’s story! Time flew by while I was reading this book and I would get so mad during my lunch breaks when I had to put it down.

I couldn’t get enough of these characters! I loved that Ginny was a mortician! It was great to see where with such an interesting career choice. She was quirky without being too much. She was relatable and such a treat to read about. I adored Jonas! He really tried to fight the pull to Ginny, but that didn’t last long!

Their romance was written in the stars and it showed. I couldn’t get enough of these two. Not only them too. We were given side characters that I loved and made me laugh way too often. Her growing friendship with Roksana made me so happy and Tucker’s jokes gave me joy.

The romance and scenes between Ginny and Jonas was everything I wanted. I was unsure if Jonas was going to be alpha like what Tessa Bailey usually writes, but I shouldn’t have worried. Jonas ended up having a dirty mouth that made me blush!

It’s a vampire novel so you kind of already know what’s going to happen before it does. However, I didn’t really even care! All in all, I loved it! Next up is Roksana and Ethan’s book and OMG am I ready for it!