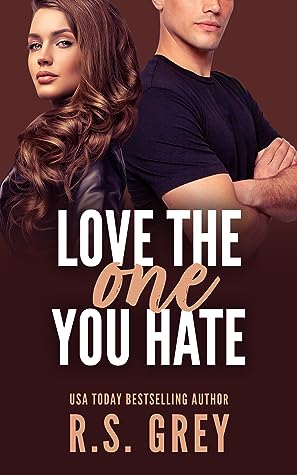 Love the One You Hate
Author: R.S. Grey
Check it Out: Goodreads

Nicholas Hunt is the man I hate.
For good reason.

His opinion of me is tainted by prejudice even before my arrival at his grandmother’s estate, and my first impression of him is just as abysmal.

His arrogance and icy demeanor make it clear that he’s the type of man who’s best handled at a distance.

Fortunately, space shouldn’t be an issue inside this Gilded Age mansion and its lush gardens. If I stick with the servants and he keeps to his sailboat and vintage Porsche, we should hardly cross paths at all. Unfortunately, at Rosethorn, I find that all roads eventually lead to Nicholas Hunt.

Sparks fly as we spar at the dinner table. Fighting words are flung in the shadows of the palatial halls.

We hang suspended in our hatred of one another, painfully oblivious to the heat and tension that build with every moment we’re left alone. We’re liable to kill one another, I think…right up until my eyes land on his lips and a new feeling grips hold of me: lust.

What’s worse?
He knows it.

They say you should keep your enemies close, but when Nicholas tightens his grip on my waist and draws me near, I’m not sure if it’s out of loathing or love.

One thing’s for sure—I intend to find out.

I enjoyed this one! I read this in one sitting and had a good time reading it. While it does have romance in it, I saw the romance as a subplot. However, I actually liked that! We got to see our main character, Maren, grow as a person and realize that she had so much to offer and was more than her past.

I really liked Maren. She was easily likable and someone that you wanted to root for. Her past was hard and she kept getting judged for it by people who didn’t take the time to know her. She got a very good opportunity from an older woman named Cornelia. Which leads us to her love interest, Nicholas, as he is her grandson.

Nicholas in the beginning, of course, came off rude. He was trying to get rid of Maren because he was unsure if she was trying to take advantage of his grandma. Once we got to know him and see him falling for Maren, I couldn’t help but adore him.

Like I said before, this does have a romance between Maren and Nicholas. It was done well and they had some steamy times between them. With that, my favorite part about this book was Maren learning about what she wanted from life and that she deserved good things to happen to her.

Overall, I enjoyed this one and hope that ya’ll pick this up when it releases!

🎇I received an ARC via the author for an honest review.