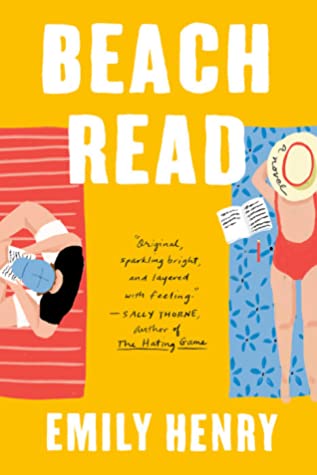 A romance writer who no longer believes in love and a literary writer stuck in a rut engage in a summer-long challenge that may just upend everything they believe about happily ever afters.

Augustus Everett is an acclaimed author of literary fiction. January Andrews writes bestselling romance. When she pens a happily ever after, he kills off his entire cast.

In fact, the only thing they have in common is that for the next three months, they’re living in neighboring beach houses, broke, and bogged down with writer’s block.

Until, one hazy evening, one thing leads to another and they strike a deal designed to force them out of their creative ruts: Augustus will spend the summer writing something happy, and January will pen the next Great American Novel. She’ll take him on field trips worthy of any rom-com montage, and he’ll take her to interview surviving members of a backwoods death cult (obviously). Everyone will finish a book and no one will fall in love. Really.

I was so excited to read this book! I’ve heard so many good things about it from other reviewers and was super excited because I adore Emily Henry’s writing. I hate to say that I don’t think this book was for me. From the synopsis and the cover, I thought I was getting something cute and light hearted, but I didn’t really get that. This talked about a lot of deep issues and was quite emotional.

Maybe because that wasn’t what I was the mood for. Maybe because I don’t usually read emotional reads. All I know is, I struggled through this one. Both of our characters are dealing with their own issues and a lot of the novel is based on that and their relationship. I’m really torn if this is romance or chick lit.

I have to say that I really liked our main character January! She was funny and so damn relatable. The way she saw the world was contagious and I couldn’t get enough of her personality.

“It had to be true that sometimes, heartbroken women found their happy endings, their rain-falling, music-swelling moments of pure happiness.”

Gus on the other hand? He was such a dry character to me. To be completely honest, I think January deserved better than him. He would hide so much himself and would only tell January how he felt about her when he realized she was pulling away. He had a wall up and quite a few issues. I felt like he should have sorted out his feelings on some things before trying to start a new relationship. Just sayin’.

All in all, I wasn’t crazy about this one. There are so many readers who have loved it so I would still recommend you pick it up it seems like something you would like!