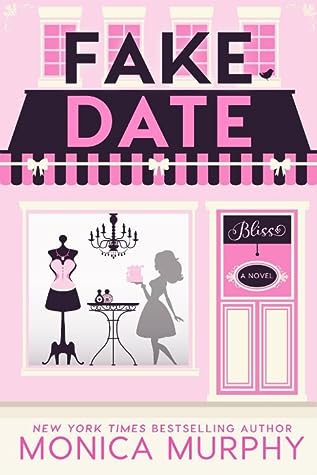 Working at a lingerie store, she helps bored housewives, spicy sorority girls, repentant husbands — and everyone in between. Yet no one sparks her interest more than Jared Gaines, the ultra-rich, ultra-sexy businessman who frequents her shop, buying delicate little “gifts” for the women in his life.

But one day, Jared sends her a gift from Bliss. Then another–and another. It doesn’t matter how thoughtful he is, or how well-chosen the gifts are, or how sexy he is. It’s inappropriate, and Sarah is determined to put a stop to it. Or at the very least, she wants to know why.

It’s the oldest one in the book, of course. He needs a fake girlfriend for the weekend while attending his brother’s engagement party. It’s a terrible idea. She’s certain it could even get her fired. So she absolutely takes him up on it.

Next thing Sarah knows, she’s in San Francisco, pretending to be in love with Jared. Not that it’s a hardship.

Except that the real feelings in their pretend relationship soon have her in over her head. Is he just faking it, or do they have their own shot at bliss?

I am a sucker for the fake dating trope and this book really gave me that. I really loved these characters and the chapters really flew by!

Even though this was the second book in a series, (I didn’t know that before I started) I never felt lost. It was easy to follow along and Murphy’s writing was great. She had a way of writing that gets me lost in her words and her characters.

Speaking of characters, I have to say that I am living for the female friendship group that we get in this book! Loving!

I was rooting for these two as soon as we got to witness the banter between them. They were sarcastic and the chemistry was downright sinful. I haven’t been this invested in a couple in quite a while. Like seriously, I was craving for this relationship to become real.

Sarah was feisty and I loved it when she continuously called Jared on his behavior. While yes Jared was an ass, he was willing to change. He was willing to become a better man because he knew that Sarah deserved better. I swoon over that than flirty words any day.

The next book is about Jared’s sister Candice and it sounds like an absolute hallmark movie. Saving that one until closer to Christmas will be so tough!