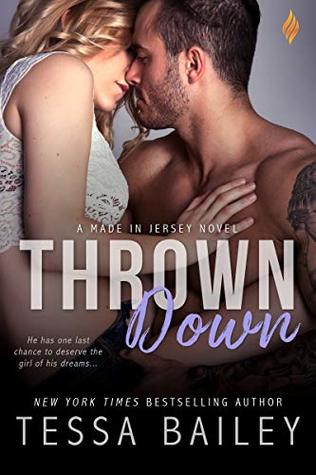 Thrown Down
Series: Made in Jersey
Author: Tessa Bailey
Check it Out: Goodreads

Overachiever River Purcell was never supposed to be a struggling single mom, working double shifts just to make ends meet. Nor was she supposed to be abandoned by her high school sweetheart, breaking her heart into a thousand jagged pieces. Now Vaughn De Matteo is back in town, his sights set on her…and River is in danger of drowning a second time.

No one believed Hook’s resident bad boy was good enough for River. Not even Vaughn himself. But he’ll fight like hell to win back the woman he never stopped loving, to keep the daughter he never expected, and convince himself he’s worth their love in the process?even if he has to rely on their fierce and undeniable sexual chemistry.

But even as River’s body arches under his hungered touch, the demons of the past lurk in the shadows. Waiting for Vaughn to repeat his mistakes one last time…

Being honest, this was about average. I was excited to read about and River and Vaughn’s second chance romance. I was expecting some angst and some adorable kid bonding moments. For him to be finding out that he’s a single father, there was hardly A N Y time spent with his daughter. What’s up with that?

Everything revolved around River and Vaughn and the break in their relationship. With some communication, everything could have been solved four years ago and even in the present time. Besides communication, I didn’t see any real reason for their love to be special. There wasn’t any real chemistry there. The whole relationship was based on sex. It didn’t feel like they had anything in common or a reason to be together.

Two books in this series and I’m disappointed. I’ve been debating on whether or not to continue with it. I do have to admit that I’m curious about Duke finding love. Maybe I’ll pick it up when I can leave my expectations at the door.