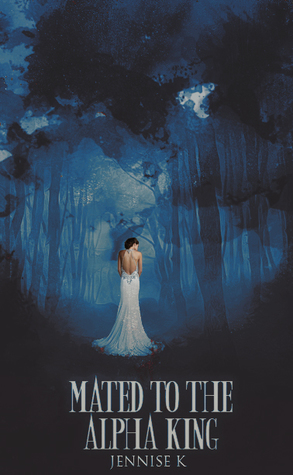 Mated to the Alpha King
Series: A Royal Mate
Author: Jennnise K.
Check it Out: Goodreads

You’re beautiful and kind and very smart. But best of all, you’re mine.

Do you remember the stories your Grandma used to tell you every night about cursed beasts, village beauties, girls in red capes and wolves in disguises?

They do. I would know. I am bound to one.

Whom, you may ask?

Well, I am mated to the Alpha King.

You will live through it with me.

I am Theia Anderson. I am just like any one of you, human, alive, and breathing.

But unlike any one of you, I’ve stumbled upon a world that until yesterday… I couldn’t even fathom into existence.

This is my story.

What prompted me to reread something that I rated so poorly the first time? A reading slump and curiosity. I came across my old review of this book and was curious if my rating would change since my reading preferences have changed since then. While my rating and thoughts really didn’t change, I could see why I finished it the first time. It’s full on teen angst, werewolves, and possessive alpha moments.

What made this a two star read for me was that Theia is a bit dumb, Bryce needs communication skills, and this book was extremely dragged out.

Theia put herself in situations that she didn’t need to be in or should have used better judgment first. How you ask? She heard someone scream in the woods outside her house and she ran out of her house with no shoes or no phone to call for help for them or herself. Let alone that it didn’t really have anything to do with her. Besides being a bit slow, she let Bryce get away with too much.

Bryce. I thought I might like him more now since possessive alpha love interests are my thing. However, I’m still not sold on him. He acted rash and my goodness was I sick of him growling and saying “mine” to Theia. People in that town let him get away with so much. Too much really! Showing up to the high school and literally throwing things because he couldn’t find Theia. Let me mention that Bryce is 24 years old. So he shows up to the school and punches a guy in the face who scared Theia in the woods. Such a wonderful guy. *sarcasm* They let him do whatever just because he was the alpha king and his wolf was so sensitive. *rolls eyes*

Since I’m on a roll, why is this book so damn long?! It was over 500 pages and I don’t understand why. The majority of this was just either Bryce throwing a fit, Theia being dense about something, or just Theia’s day by day life. While the big reveal at the end was a surprise, it took too long to get there. So much of this book could have been cut down.

As you can see, my rating stayed the same, but I had more thoughts about it. I saw that she released Rome’s book back in 2019. I’m still going back and forth on it because I wasn’t a big fan of this one and that book is also over 500 pages. Maybe one day I’ll get to it.

Things that really got to me were the all the grammar mistakes, the choppy writing, and the timeline of everything.

Theia was one of the most immature, annoying, indecisive characters I have read in a long time. She was always going back and forth about how she felt for Bryce and the being in the castle. Her inner monologue was tiring as well. The book really could have done without her talking to herself all the time.

For Bryce to be an alpha king he sure was a big ass baby. Like seriously, the guy acted like a kid who didn’t want anybody to play with their new toy when it came to Theia. How many times can somebody say “Mine”? I don’t think I have ever rolled my eyes that much. And can we please talk about all the growling? That was excessive.

I felt like the timeline was off. She was was only there for like a week and she already has best friends and saying that she loves these people. another week she’s in love Bryce.

There was really nothing believable about this book. Her parents are okay with their high school daughter being a mate this 24 year old alpha king and spending damn near every night with him. I get Theia was 18, but cmon!

Overall the book might be good to some but this was just a miss for me.

8 thoughts on “Book Re-Review| Mated to the Alpha King by Jennise K.”