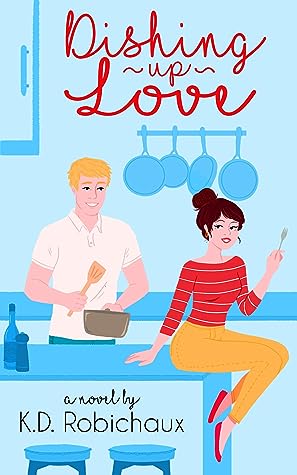 Dishing Up Love
Author: K.D. Robichaux
Check it Out: Goodreads

One hot chef
One beautiful woman
One chance encounter
Mix and dish up some love
Erin Bazzara is living life to the fullest as a single woman in New Orleans and making a name for herself as one of the top psychologists in the state of Louisiana. Years ago, she swore off men after receiving devastating news, news that proved her fiancé didn’t care about the rule “in sickness and in health.” It also proved he didn’t really care about her.
Good riddance, who needs a man anyway? Not her. Not ever again.
Or so she thought, until she literally runs into a certain world-renowned chef who looks at her like she might be his next four-course meal.

Chef Curtis Rockwell, host of the award-winning Chef To Go, never knows who the next participant on his show will be. State to state, city to city, he scours grocery store aisles each episode, looking for the perfect stranger to go home with so he can teach them how to cook a gourmet meal. It’s always been just a part of his job, a job he loves but still a job…

Then he spots her. The perfect participant. The perfect woman. A woman not even his dreams could have conjured up.

Now, all he has to do is prove the heat between them won’t just sizzle out like yesterday’s flambé.

This was as cute as it’s cover! This was my first book from Robichaux and I would read from her again. I loved the whole aspect of their meet-cute. Meeting at the grocery store and her being a guest/contestant on his show? Adorable!

Curtis and Erin were cute together and had some awesome chemistry. They fell into an easy relationship and the banter between them was hilarious and flirty.

While I did enjoy the romance and characters, I couldn’t give it more than 3 stars because I couldn’t stay fully engaged in the book. This took place in New Orleans and we were given quite a bit of history about the city. While I thought that was cool, it kept taking me out of the story. I wanted to focus on Curtis and Erin and their forming relationship, but I kept having to focus on the lore and history of the city. Now don’t get my wrong, there isn’t anything wrong with the author putting that in her book. I’m just saying that it caused a disconnect for me personally.

All in all, I liked this one and thought the romance was done well. While I didn’t love it, I would read more by this author.

10 thoughts on “Dishing Up Love by K.D. Robichaux”