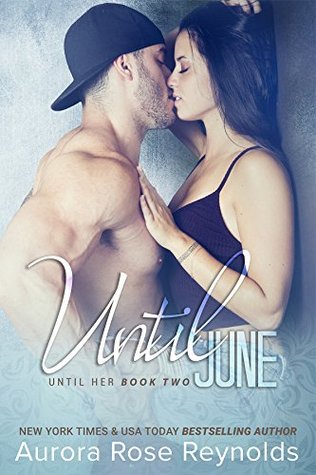 Until June
Series: Until Her/Him
Author: Aurora Rose Reynolds
Check it Out: Goodreads

June Mayson and Evan Barrister’s whirlwind courtship resulted in a secret marriage right before he left for boot camp. Evan knows deep in his gut that June is too good for him, but after getting a taste of the beautiful life they can have together, he’s unwilling to let her go. June promises to wait for him, knowing neither time or distance will ever change her feelings for Evan—that is until she’s served with divorce papers while he’s overseas and she’s forced to let him go.

Her marriage and divorce a well-kept secret, the last person June expects to run into when she moves back to her hometown is Evan. Angry over the past, she does everything within her power to ignore the pull she feels whenever he is near. But how can she ignore the pain she sees every time their eyes meet? How can she fight the need to soothe him even if she knows she’s liable to get hurt once again?

Is it possible for June and Evan to find their way back to each other again? Or will they be stopped by an outside force before they ever have a shot?

Umm, this just okay for me. Most definitely my least favorite so far. Maybe because it was a second chance romance and I’m used to getting all of the first times in this series? We didn’t get that with June and Evan and were dropped into their romance and were expected to swoon.

I was going to give this three stars at first, but, the more I thought about it the more I realized I didn’t enjoy it as much as I wanted to. We never really got to know Evan. All we learned was bits of his pasts family life, but nothing about him outside of June. June was an okay character. Not one of my favorite Mayson women, but likable. I do have to say, I did like the way she had Gia’s back. Which also makes me want to reread Falling Fast again. If you haven’t read that one, please do!

With all of the books in the series, there is a suspenseful plot line. We had two going on here. Ne with an of June and one with Evan and a spy in the club. Both of these were good and brought more to the book. However, there was so much sex here. Yes, you heard me right. After they got back together almost every chapter break was them having sex. I even skipped through a couple of them towards the end. It’s like the separation was resolved so quickly, there was no other plot line so the author just threw in a lot of sex scenes.

Overall, I didn’t really enjoy this one like I did the rest of the books. I could seriously see this being a novella and having a better impact. The next book will be about Ashlyn and I’m so excited about it. I can’t wait to see what happens between her and her boss!

2 thoughts on “Until June by Aurora Rose Reynolds”