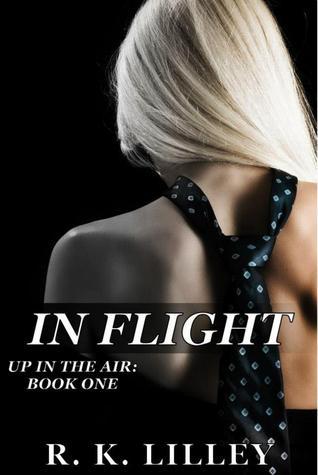 In Flight
Series: Up in the Air
Author: R.K. Lilley
Check it Out: Goodreads

When reserved flight attendant Bianca gets one look at billionaire hotel owner James Cavendish, she loses all of her hard-won composure. For a girl who can easily juggle a tray of champagne flutes at 35,000 feet in three inch heels, she finds herself shockingly weak-kneed from their first encounter. The normally unruffled Bianca can’t seem to look away from his electrifying turquoise gaze. They hold a challenge, and a promise, that she finds impossible to resist, and she is a girl who is used to saying no and meaning it.

Bianca is accustomed to dealing with supermodels and movie stars in her job as a first class flight attendant, but James Cavendish puts them all to shame in the looks department. If only it were just his looks that she found so irresistible about the intimidating man, Bianca could have ignored his attentions. But what tempts her like never before is the dominant pull he seems to have over her from the moment they meet, and the promise of pleasure, and pain, that she reads in his eyes.

I don’t know what even made me pick this up, but I kind of want the time I spent reading this book back.

I did not like Bianca. I thought she was pretty annoying. Yes, she had a terrible thing happen in her childhood. Yes, some things came out about James that were not good. But the way she handled a lot of things were terrible. She had this nonchalance that aggravated me to my core. No matter what James did or said, it didn’t matter because she had written off this relationship from the beginning. She stayed so unaffected by everything that I honestly don’t understand why he kept giving a shit about this woman. Now he does have a lot of explaining to do! However, she didn’t even care enough to get an explanation.

There are two more books in this series, but I’m out. I refuse to read another word about this couple.