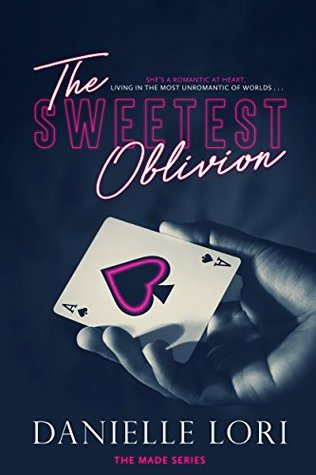 The Sweetest Oblivion
Series: Made
Author: Danielle Lori
Check it Out: Goodreads

She’s a romantic at heart, living in the most unromantic of worlds . . .

Nicknamed Sweet Abelli for her docile nature, Elena smiles on cue and has a charming response for everything. She’s the favored daughter, the perfect mafia principessa . . . or was.

Now, all she can see in the mirror’s reflection is blood staining her hands like crimson paint.

They say first impressions are everything . . .

In the murky waters of New York’s underworld, Elena’s sister is arranged to marry Nicolas Russo. A Made Man, a boss, a cheat—even measured against mafia standards. His reputation stretches far and wide and is darker than his black suits and ties. After his and Elena’s first encounter ends with an accidental glare on her part, she realizes he’s just as rude as he is handsome.

She doesn’t like the man or anything he stands for, though that doesn’t stop her heart from pattering like rain against glass when he’s near, nor the shiver that ghosts down her spine at the sound of his voice.

And he’s always near. Telling her what to do. Making her feel hotter than any future brother-in-law should. Elena may be the Sweet Abelli on the outside, but she’s beginning to learn she has a taste for the darkness, for rough hands, cigarettes, and whiskey-colored eyes. Having already escaped one scandal, however, she can hardly afford to be swept up in another.

Besides, even if he were hers, everyone knows you don’t fall in love with a Made Man . . . right?

I have been seeing this book and series over Goodreads for the past year. I finally broke down and decided to see what all the hype was about. I thought it was okay, but I can see why people like it.

I enjoyed the author’s writing here. I picked this up and only planned to read the first chapter to see if it was something that I would like. I ended up finishing it in one day! The story flowed and the writing kept me wanting to read more.

As for the main characters, I enjoyed them. They made this story! I was a little hesitant about the whole future brother in law thing, but since it was arranged and they never were together I was able to continue reading. Elena and Nico had mad chemistry! The way the author wrote the angst between them and the moments that almost pushed them together but didn’t, had me swiping on my Kindle super fast! At one point I thought I was going to go into shock behind the amount of angst and longing we had going on here.

Now, I did enjoy the characters but I did have some issues with the actual way everything played out. While I did enjoy the angst, I do feel like it started to drag out a bit. We spent so much time with them not together and fighting that pull, that we hardly had enough time with them together. That lasted me until the end of the book. I wanted to see their everyday life after everything worked out.

Now the next book is about Gianna and Christian and while I’m not really interested in them, the reviews are all praise so I might pick it up.

5 thoughts on “The Sweetest Oblivion (Made #1) by Danielle Lori”