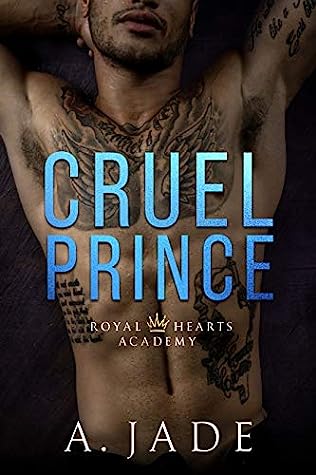 And forced to face Jace Covington.
My first friend. First crush. First kiss.
The one I left behind.

Only—he isn’t the same boy I gave my heart to.

This new Jace is as cruel as he is gorgeous.
And he’s determined to make my life a living hell.
Along with the rest of his glorified family and crew of tyrants.

They expect me to worship the ground they walk on like everyone else, but I’d rather eat dirt.

If Jace Covington wants me gone…he’ll have to try harder.
Because I’ve never been the kind of girl to play by the rules.

WARNING: Royal Hearts Academy is a New Adult/High School series of standalones filled with drama, a touch of angst, and boys who are bad to the bone.
This series is recommended for mature readers due to graphic language and sexual content.

This kept coming up on my recommended list so I decided to give it a try. I really don’t see what the hype is about with one. I stale plot, a blah love interest, and a book that seemed drawn out.

The only thing I liked about this book was the main character, Dylan. She didn’t take any shit and legit punched her asshole cousin in the face. We love a badass heroine who takes no shit. Now what she saw in Jace, I don’t know.

I get it. They were best friends when they were younger. However, it felt as if the author was trying to force chemistry into the two main characters and it just wasn’t there. Jace wasn’t worth half the effort that Dylan went through.

I might pick up the next one only because I’m intrigued by Sawyer. She’s a bible thumper who curses like a sailor and is plus-sized. Let’s hope that Cole doesn’t ruin it.