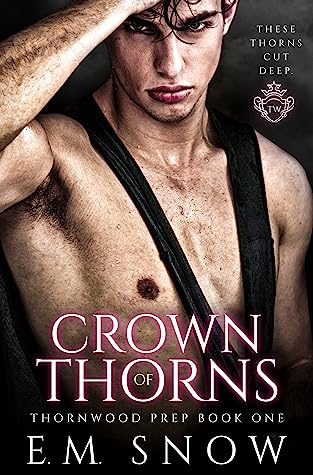 Only a fool with a death wish would steal from the Townsends.

And my older brother? He’s a fool. But instead of making me an orphan with the snap of his filthy rich fingers, Royce Townsend gave my brother a choice: Three months. Three months to pay back what was owed and all would be forgiven.

You know that saying, “if it sounds too good to be true…”

Yeah, this is one of those situations.

Because the Townsends never do anything out of the goodness of their hearts.

He’s already the king of our new school, but I heard his name well before Ravenwood and Thornhaven merged. Still, I never trusted the rumors.

That was my mistake.

Phoenix really is a terrible, royal beast who wrecks lives and ruins girls.

And now, thanks to my brother, I belong to that beast for the next three months.

I should have waited to read this one when book two came out. This left off on a cliffhanger and I’m so upset that I don’t have the next one.

I flew through this in one day and found it hard to put down. There was something so easy going about the writing that I just kept reading and reading. Now this wasn’t perfect by any means, but it kept my attention. This is a bully romance, so expect that along with some over the top hate. Like seriously, the girl hate here was atrocious. It was too much and way over the top. If you are sensitive to bullying then I would probably skip them. There were so many times that they told her to either to kill herself or eluded to it. So if that’s a trigger for you, then be careful.

The romance was a bit all over the place, but it was still good. It really gave me that energy I love in a bully romance. Where the love interest is terrible and you know it, but it’s always so good when they finally give in. That’s what we had here. Even though Phoenix had some issues (serious issues), I still wanted him and Josslyn to be together. I was scared that the author was going to try and make some type of love triangle happen and I’m happy that it didn’t happen and hope that it stays that way!

Like I said, it’s not the best book ever. However, it’s entertaining and if you enjoy bully romances then you might enjoy this one. Just know it ends on a cliffhanger and you’ll wish you had the next book ready.