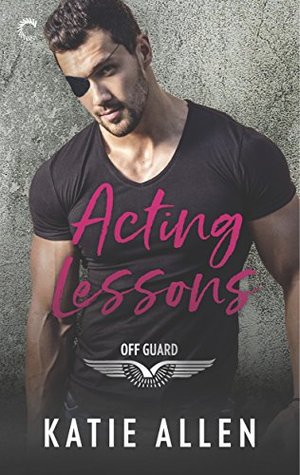 It’s an offer she can’t refuse. Two weeks of work for enough cash to quit her day job and focus on auditions is a dream come true for struggling actress Topher. All she has to do is play girlfriend to a wealthy friend, helping him secure his trust fund. Then she meets her friend’s sinfully handsome, firmly off-limits uncle, and all bets are off.

Not only is Uncle James surprisingly younger than imagined, he’s charismatic and hot as hell. And there’s something about the wounded veteran’s hungry stare that has her thinking the feeling is mutual.

Topher’s determined to ignore Uncle Sexy, but the forbidden temptation is too much to handle, especially after James flashes his dominant side. But surrendering to temptation is easier said than done when the plot thickens. Even if Topher can manage to fool everyone involved, she’s not sure she can fool her own heart—or the man she’s definitely not supposed to be falling for.

This has been sitting on my kindle for at least a year and I’m finally getting around to reading it. I think I saw this on a Goodreads list that this had a daddy/babygirl relationship in it and that’s what made me finally read it. I know, I know, but that’s what I like. Anyhow, I’m torn on my feelings for this book.

It started off strong and then it started to drag. Topher (weird name btw) was equal parts annoying and hilarious to me. She was supposed to fake being a bad girlfriend by being ditzy and super energetic, but even after she didn’t have to act like that anymore she still did. This makes me wonder if it was really an act and did the reader or James get to know the real her.

You could tell that the author was trying to make the book have humor to it, but it did seem to go a bit overboard and even cringy at times. Besides the humor, there was so much going on here. It seemed like everyone that they knew came over for Christmas. We had jealous ex-girlfriends, mean girls, and terrible parents. You could honestly get whiplash by the number of people or drama that they brought with them.

As far as the romance, it has its cute moments. I really liked Jamie. Just because he was disabled (he had one eye, and had mass amounts of scar tissue from war), that didn’t make him any less dominant or a good guy. I liked the way he cared for Topher and thought they actually balanced each other out. Which leads me to the Daddy/babygirl relationship. I’m an avid reader of this type of relationship so I was excited to read a full length novel about it. However, I found it just okay and it was only brought up for sex value rather than an actual lifestyle. So that was disappointing.

As you can see, my feelings are all over the place on this one. While Acting Lessons didn’t wow me, book two does sound promising so I might pick that one up soon.

One thought on “Acting Lessons (Off Guard #1) by Katie Allen”