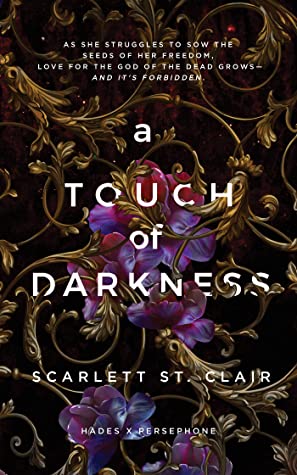 Persephone is the Goddess of Spring in title only. Since she was a little girl, flowers have only shriveled at her touch. After moving to New Athens, she hoped to lead an unassuming life disguised as a mortal journalist. All of that changes when she sits down in a forbidden nightclub to play a hand of cards with a hypnotic and mysterious stranger.

Hades, God of the Dead, has built a gambling empire in the mortal world and his favorite bets are rumored to be impossible. But nothing has ever intrigued him as much as the goddess offering him a bargain he can’t resist.

After her encounter with Hades, Persephone finds herself in a contract with the God of the Dead, and his terms are impossible: Persephone must create life in the Underworld or lose her freedom forever. The bet does more than expose Persephone’s failure as a goddess, however. As she struggles to sow the seeds of her freedom, love for the God of the Dead grows—a love that is both captivating and forbidden.

I finally got around to reading this one! I switched between listening to this on audio and reading the ebook. The voice narrator was amazing for the audiobook. I would definitely recommend listening to it if you’re interested in reading this.

I enjoy Hades and Persephone retellings and this one was pretty good. I enjoyed the writing and the flow of the story. The romance was kind of like a slow burn but the chemistry pull between them was written so well. They had good banter and I couldn’t wait to read about them finally giving in to their attraction.

I did have a few issues with the pacing of the book and Persephone. There were quite a few times where Persphone came off so annoying and hypercritical. She was determined to see the worst in Hades no matter what new information about him came about.

6 thoughts on “A Touch of Darkness by Scarlett St. Clair”