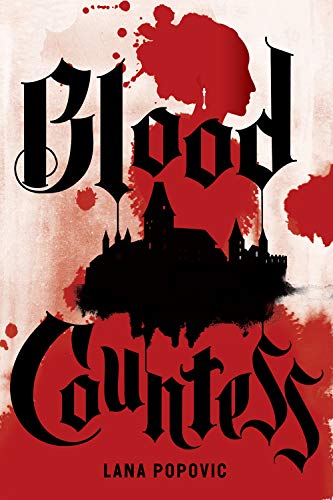 A historical YA horror novel based on the infamous real-life inspiration for Countess Dracula.

In 17th century Hungary, Anna Darvulia has just begun working as a scullery maid for the young and glamorous Countess Elizabeth BaÌ?thory. When Elizabeth takes a liking to Anna, she’s vaulted to the dream role of chambermaid, a far cry from the filthy servants’ quarters below. She receives wages generous enough to provide for her family, and the Countess begins to groom Anna as her friend and confidante. It’s not long before Anna falls completely under the Countess’s spell—and the Countess takes full advantage. Isolated from her former friends, family, and fiancé, Anna realizes she’s not a friend but a prisoner of the increasingly cruel Elizabeth. Then come the murders, and Anna knows it’s only a matter of time before the Blood Countess turns on her, too.

I was so excited to see a book about Elizabeth Bathory. She was a person that I couldn’t read enough about back when I was around 15. However, I wasn’t a big fan of this book.

It started off great but what made this such a drag for me was the execution of everything. I never liked Elizabeth at any point in this book. I know that she’s a villain and a bad person, but she had nothing to make her seem extraordinary and that’s what I was looking for. Anna was okay, but she was super naive. So many times I wanted to shake her and yell “Anna open your eyes!”. Throw in a romance that was undeveloped and not really needed, and there you have these two.

What also made this story underwhelming was the pacing and the ending. It started off slow, picked up and then became slow again. Once I got to about 65%, I was so ready for this book to end. So much time is spent reading about these two falling in love and their everyday life. I wanted and expected more of her crimes. Also, the ending was way too easy! Everything wrapped up with a pretty bow on top and it irked me.

For the horror fan out there, this was gory! I was wincing and also reading with one eye open because I wanted to see how far it would go. Seriously, the gore was the best part of this book. You got to see how far off the hinges Elizabeth really was. She blossomed in the pain and death that she inflicted on people.

Overall, it didn’t live up to my expectations. Maybe others will love it but, I can’t say that I will be recommending it or picking it up again.

I received an ARC via NetGalley for an honest review.