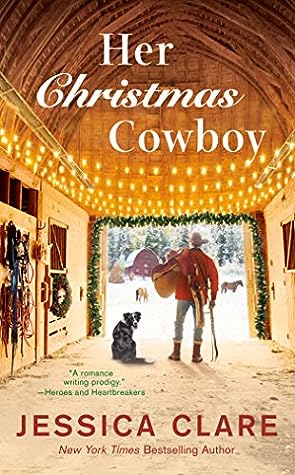 Caleb Watson has been crushing on elementary school teacher Amy Mckinney ever since he saw her. She’s oblivious to his feelings–probably because he’s never said a word to her. But when he learns Amy’s going to be Mrs. Claus in the local Christmas celebration, he volunteers to be Santa so he’ll finally have the chance to introduce himself. Even more than that, he’ll use this opportunity to shower her with presents.

Amy’s been receiving all kinds of Secret Santa gifts at work — and she has no idea who her secret admirer is. She wishes he’d make himself known so they can go on a date, though, because being a newcomer in close-knit Painted Barrel, Wyoming, is pretty lonely. When her flaky landlord claims he’s the gift giver…it’s not quite the bachelor Amy had in mind. However, she’s doubly shocked when gruff newcomer Caleb Watson crashes her date and insists he’s really the one leaving her presents.

Amy’s not sure what to think. Caleb’s never indicated that he likes her, much less wants to date. Can he prove to Amy he’s not just the perfect Santa to her Mrs. Claus, but the man of her dreams?

This is the third book in this series that I’ve read and I enjoyed it just as much as I enjoyed the others. Add in that this was set around Christmas time and it was a real treat!I thought that Caleb and Amy were adorable together! These two had so many cute moments and made me smile so much with their interactions!

“Because he’d known the very first time he saw Amy McKinney that he was going to marry her. Now he just had to convince her…”

What you should know is that Caleb had no communication skills, especially when it came to women. Throw in that he basically fell in love with Amy when he first saw her and it was basically funny moments waiting to happen. It was hilarious to read about him squirming and saying the wrong things to Amy. Reading about him finding his voice was a good time.While this was cute, I did have an issue in the way Amy immediately wilted when back in her ex-husband’s space. It made me wonder if she was still single would she just have caved and went back with him. It seemed like she didn’t have a backbone until Caleb was there. It didn’t seem really good for her character growth.

Besides that, it was a good addition to the series and I can’t wait for Jack’s book.