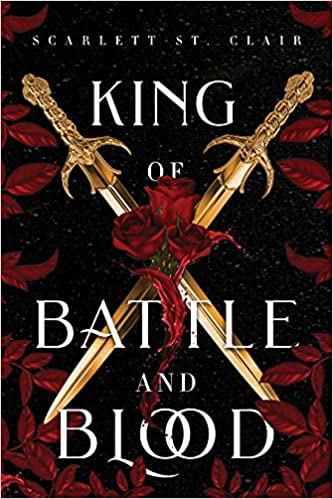 Isolde de Lara considers her wedding day her death day. To end a years-long war, she is to marry vampire king, Adrian Aleksandr Vasiliev, and kill him. ⠀

But her assassination attempt is thwarted and Adrian threatens that if Isolde tries kill him again, he will raise her as the undead. Faced with the possibility of becoming the thing she hates most, Isolde seeks other ways to defy him and survive the brutal vampire court. ⠀

Except it isn’t the court she fears most—it’s Adrain. Despite their undeniable chemistry, she wonders why the king——fierce, savage, merciless—chose her as consort. ⠀

The answer will shatter her world.

This had been on my TBR for quite some time. I’ve always heard good things about this author’s books, and I can understand why. While I wouldn’t call this a favorite, I did like it. The writing was addictive and the pace of the story was just right.

While I liked our characters, I feel as if they weren’t fleshed out very well. Adrian had this mysterious air about him, but that’s really it. We really didn’t get to know anything about him. Isolde had a lot of “I’m not like other women” moments, but I was able to overlook them. I liked that she wasn’t weak and wasn’t shy about her sexual pasts or wants.

As far as plot wise, I found quite a few things here predictable. There were a lot of plot twists that I called. So that made it a bit frustrating while waiting for Isolde to figure things out. If you like court drama and a lot of sex scenes, then this will be for you.

I’m not dedicated to reading the next book instantly when it comes out, but I might pick it up from the library a few months after the release date.