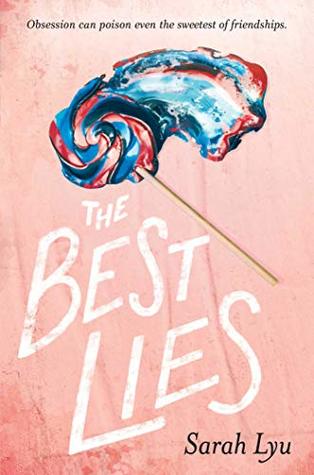 The Best Lies
by Sarah Lyu
Check it Out: Goodreads

Gone Girl meets Suicide Notes from Beautiful Girls in this mesmerizing debut novel about a toxic friendship that turns deadly.

Remy Tsai used to know how her story would turn out. But now, she doesn’t even know what tomorrow will look like.

She was happy once. Remy had her boyfriend Jack, and Elise, her best friend—her soul mate—who understood her better than anyone else in the world.

But now Jack is dead, shot through the chest…

And it was Elise who pulled the trigger.

Was it self-defense? Or something darker than anything Remy could have imagined? As the police investigate, Remy does the same, sifting through her own memories, looking for a scrap of truth that could save the friendship that means everything to her.

Told in alternating timelines, this twisted psychological thriller explores the dark side of obsessive friendship.

This was a book that I was looking forward to but I am so disappointed by what I just read. This was portrayed as a mystery type read and that couldn’t be farther from what this actually was. This read nothing like a mystery/thriller like it’s portrayed to be. It really read like any other YA contemporary and I was so disappointed not to have the mystery/thriller feel.

This book was about the effects of a toxic friendship. The friendship follows Remy and her friend Elise. We get flashbacks of them meeting and forming this bond and everything that leads up to Elise shooting Remy’s boyfriend Jack.

As far as the relationship between Remy and Elise goes, the first word that comes to mind was toxic. Remy seemed to have this obsession with Elise. She thought that she was tough and strong and had a hero complex about her. Elise bathed in that adoration but in truth was just a manipulative person and a liar. I keep seeing this book being tagged as LGTBQ+ but I don’t think that’s the case. They did say that they loved one another called each other their soulmates but I don’t think that it was in an attraction way. They saw each other as family and they thought of their tragic lives as something that gave them strength. As much as Remy cared for Jack, I don’t see this being true.

I have to say that the only redeeming character here was Jack. Yes, the guy who was shot in the beginning of the book. Not even Remy was likable to me. She enabled Elise’s behavior so much that she even started making excuses for her in her mind. She knew that something should have been done way before the shooting happened.

Like I said earlier, this definitely read more like a contemporary than a mystery/thriller. I also need to say that this book was so much darker than what I thought. Some of the things said here really shocked me. While it does make it more real, I was still shocked that the author went there.

All in all, this book was dark and showed how some friendships can turn toxic. I think it did show that part well but it lacked in other areas. Since this was the author’s debut, I would be willing to read something else by her.

17 thoughts on “The Best Lies by Sarah Lyu”